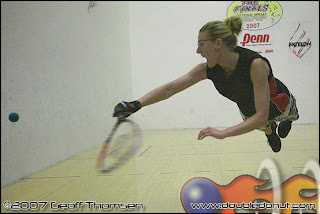 Colorado Springs, Colo. - June 25, 2009 - According to data recently released by the Sporting Goods Manufacturers Association (SGMA) in its annual report for all sports participation, racquetball is once again, one of the fastest growing sports in America. The SGMA Sport's and Fitness Participation Report (2009 Edition), is the latest in a series of reports and studies that have cited significant growth for racquetball in overall participation.
The SGMA study showed total player participation in 2008 grew by more than 18.1% from the previous year. The renewed interest in racquetball validates the ongoing efforts of the sports various programs within the United States Racquetball Association (USAR). This also includes supporting organizations and industry manufacturers that have been instrumental in working together on a range of successful growth initiatives. The increase in participation has also fueled a significant increase in total play occasions and also affects industry sales for all racquetball manufacturers.
Racquetball has experienced a healthy increase in the number of total racquetball players and frequent players in 2008 despite the constantly changing market and economy. Currently the sport has a large international presence with people playing worldwide, in over 90 countries on five continents.
This growing participation base certainly strengthens the foundation of the sport of racquetball and helps racquetball emerge as a healthier and stronger sport. "This is a unique and exciting time for our sport. Interest in racquetball is on the rise and participation levels are growing," said Jim Hiser, Executive Director, USA Racquetball. "We will continue to promote and grow youth and adult participation in order to keep this momentum going."
Posted by Mauro at 8:37 PM