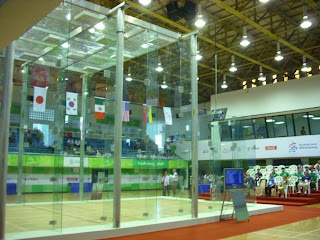 We have just come from what can be arguably the best International Racquetball competition ever. The World Games exposed the sport for the first time to International Olympic Committee Members as well as over 70 countries worldwide.
Led by IRF President Keith Calkins the IRF contingent of 60+ was comprised of players from 13 Countries , 10 officials, and many coaches and delegates who showcased racquetball to the world over four days
Racquetball was showcased on the Korean Racquetball Federation's all-glass portable court, which is also the first new racquetball court built in Taiwan in 25 years.
The Taiwan Racquetball Federation believes that this event will bring a boom of court building in Taiwan, which could exceed that of Squash in the future.
The World Games is a IOC supported Multi-International Sports competition for non Olympic sports founded in 1981. Racquetball was a founding sport competed in 1981 in Santa Clara , California.
The World Games is a major step towards the inclusion of Racquetball in future Olympic Programs.
The 2013 edition of World Games will be held in Cali, Colombia and once again Racquetball will be a full medal sport on the program.
Posted by Mauro at 1:20 PM