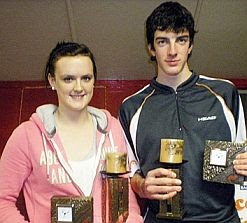 For Sean Keane from Fermoy, Ireland, who has just turned seventeen, the 5th Ballinrobe Open will be a memorable event as he came through to win his first Open Singles Championship. Sean defeated the legendary Noel O`Callaghan (Fermoy) by 2 games to 1 in a close final having already beaten Kevin Jennings (Castlebar) in the semi final.

In the Womens Singles, Clodagh McManamon overcame her club mate Donna Ryder to win her third Open Singles event. In the Doubles, Jimmy Gannon and Noel O`Callaghan pulled off a 2-1 victory over Sean Keane and Joe Dillon while the Womens Doubles winners were the McManamon twins Ciara and Clodagh. Other winners were, Niall Nevin (Templederry) in the Mens B/C Singles, Keith Gallogley (Youghal)in the Mens D Singles and Martin J Potter (Annaghdown) in the Mens Novice Singles.

More on Irish Racquetball can be found here: http://www.racquetball-ireland.com
Posted by Mauro at 2:52 PM