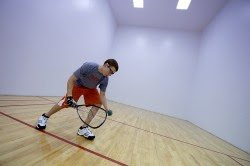 While most freshmen hang out with their friends after they're done studying, Kyle Gahagan spent many of his weekends this fall alone in his car, driving to collegiate racquetball conference tournaments as he represented RIT.

There wasn't much camaraderie from his teammates - because there weren't any.

Gahagan, the only member of the RIT team, registered for the tournaments, paid for his hotel and meals and drove back and forth to competitions in New Jersey, Pennsylvania and Albany. He'll do more of the same before the racquetball season ends in May.

"It's cool to be able to represent an entire university by yourself. But there is a lot of pressure too," says Gahagan, 18, of Parkton, Md.

Gahagan began playing racquetball when he joined a gym four years ago for exercise. He fell in love with the sport and began playing competitively in tournaments.

Born profoundly deaf, Gahagan wears hearing aids. Although sometimes he has trouble hearing what the referees are saying, he believes he has an advantage over his hearing opponents because he's accustomed to using his eyes more.

Since coming to RIT, he's on the courts every day in the Gordon Field House. "I try not to practice alone because it can get boring, but the majority of the time I practice alone because not a lot of people here play," he says. "We have six racquetball courts but I'm usually the only one practicing on them."

He was sidelined for a couple of weeks when he seriously bruised his hip while diving on the floor to return a ball. But Gahagan says racquetball normally isn't a hard game to play. The ball can only hit the floor once before needing to be returned.

Serious players can use geometry to give their opponent a difficult shot to return. And "kill shots" hit the wall so low, they are impossible to return.

"I've played 65-year-olds that have kicked my butt," he says. "It's a workout and you don't even know it's a workout. You're just having fun."

Jan Strine, an NTID faculty member who supports intercollegiate athletics and wellness for deaf and hard-of-hearing students at RIT, was impressed with Gahagan after learning he was representing RIT on his own.

"To be self-motivated, to have the initiative to seek out a conference and get involved on his own, I think that's pretty ambitious," Strine says.

Gahagan would like to have several other students join the RIT team to compete against other colleges. "I'm doing it because I love the sport," he says.

Strine says the likelihood of racquetball ever becoming a varsity sport at RIT is remote because other colleges in RIT's Empire Eight conference don't have varsity racquetball teams. Still, it could be possible to have racquetball recognized as a club sport, with RIT providing some assistance for traveling if other members join.

And Strine added Gahagan's name to her list of other deaf athletes on campus, so he can be more involved with student athletes and attend their functions.

"He's a great kid and very ambitious," Strine says. "He is a racquetball fanatic. He is in love with the sport. It seems to be part of his identity, loving racquetball."

Gahagan has won most of his matches while representing RIT in conferences this fall, and even made it the quarterfinals in one tournament. None of the teams he has played against only have a single member.

This summer, he attended a racquetball training camp at the Olympics Training Center in Colorado Springs. Most of his expenses have been paid by his family, and through sponsors such as Rollout Racquetball, which provides his jerseys, and Ektelon, a manufacturer of racquetball equipment.

"Without them, I don't know if I would play so much. I break a lot of racquets diving."

It may seem that racquetball is always foremost on his mind - and it usually is - but Gahagan insists school and his homework is a greater priority. "All I do is study and play racquetball," he says.

Gahagan, who decided to attend RIT because it is home to the National Technical Institute for the Deaf, is a biomedical science major. The youngest of three brothers, Gahagan's mother died of cancer when he was 12. "That was a big driving force for me to want to be a doctor," he says.

His goal to be a physician may be high, but being the only member of a sports team is also ambitious.


"A lot of people have this set thinking that you can't do something because being deaf limits what you can do," he says. "Even if you are deaf or hard of hearing or have any disability at all, it's not impossible to do something."

National Technical Institute for the Deaf
Posted by Mauro at 10:06 AM