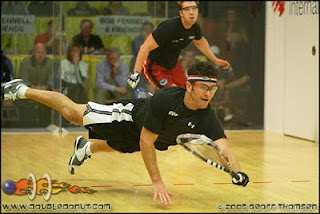 Cliff Swain is the winningest player in professional racquetball history. He began playing the pro tour - International Racquetball Tour (IRT) - in the 1980s and continued doing so into the 2000s. Known for his great drive serve and on court intensity, the left-handed Swain was a dominant player in the 1990s finishing as the #1 IRT player in 5 seasons during that decade. Swain retired from the IRT following the 2006-07 season[2], but did play some tournaments in the 2008-09 IRT season. He also played on the Classic Pro Racquetball Tour (CPRT) for former pro players over 40 in the 2008-09 season. Swain was inducted into the USA Racquetball Hall of Fame in 2003.

Swain won his first professional racquetball title in 1985 at the Tulsa Open in Tulsa, Oklahoma. Swain went on to win the 1985 Ektelon National Championship in his first season on tour, consecutively beating racquetball legends, Marty Hogan, Dave Peck and Greg Peck. Swain was named the Professional Racquetball Rookie of the Year in 1985. Cliff remained one of the top ten professional players from 1985 to 1989. In 1990 Swain finished the year as the number one ranked player in the world for the first time. Swain would go on to finish number one five more times in 1993, 1994, 1995, 1998 and 2002. Swain won over eighty tournaments in his pro career including the 1997 and 2001 US Open Racquetball Championships.

Swain would likely have won more racquetball tournaments, but in 1990 at the age of 24, he left racquetball to pursue a tennis career at the encouragement[3] of Ion Tiriac, one time coach of Boris Becker. That pursuit lasted two years and although Swain had some success, it was not nearly at the level he had experienced in racquetball.
Posted by Mauro at 3:43 PM