USA is the World Junior Champion 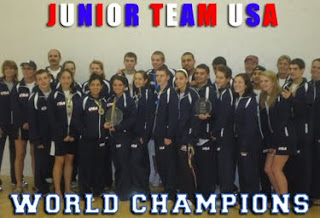 The IRF 21st World Junior Racquetball Championships concluded as nearly 250 of the best junor racquetball players from across the world gathered to compete for individual and team medals. The event kicked-off with an opening ceremony that represented 16 countries and symbolizes the tradition of international competition. The event was held at the Centro Olimpico Juan Pablo Duarte in Santo Domingo, Dominican Republic. Junior Team USA won the boy's and girl's overall team competiton to capture the team title. Team USA won the overall team title in 2008 and repeats as the champion for 2009.
Team USA's Jose Rojas was crowned the winner of the Boy's 18 and under singles division as he would defeat Mexico's Alejandro Cardona in the finals, 15-7, 15-10. Rojas would also add another gold medal to his resume by winning the Boy's 18 and under doubles with partner Jose Serrano as they narrowly defeated Team Ecuador in the finals, 15-3, 15-8.
Team USA's Aubrey O'Brien did not drop a game on her way to the finals as she defeated Mexico's Sofia Rascon, 15-11, 15-4 to capture the gold medal in the Girl's 16 and under singles. O'Brien would also win another gold medal by winning the Girl's 18 and under doubles with partner Danielle Key as they defeated Team Bolivia in the finals, 13-15, 15-8, 11-0.
article from USA Racquetball
for more info on USA Racquetball go to
http://www.usra.org/
Posted by Mauro at 8:57 AM