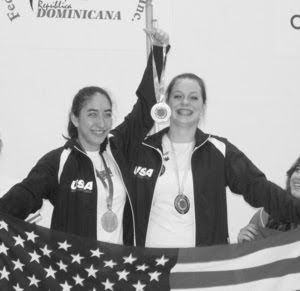 Falls resident Abbey Lavely, right, and partner Kelani Bailey show off their medals after winning the gold in the Girls 14 Doubles division at the Junior World Racquetball Championsships Dec. 20 in the Dominican Republic.

Lavely earned top honors for the Girls 14 Doubles competition along with her partner, Kelani Bailey of Chesapeake, Va. Their win also helped power the Team USA to victory in the girls and overall team titles.

Lavely and Bailey swept through the early qualifying rounds by dominating teams from Guatemala (15-2, 15-4) and Ireland (15-5, 15-4). This earned the girls the top seed in the regular draw for the World Championship title and a first-round bye.

The girls cruised through the quarterfinals, beating Argentina 15-3, 15-1. Next on the agenda was Canada, who proved no match for the Americans --15-4, 15-5 was the final score.

This put the girls into the finals against Bolivia, who beat Mexico to make it to the final round in a close match. Knowing how strong the Bolivian and Mexican teams were, Lavely and Bailey geared up for the final and clinched victory 15-7, 15-10. They were the only team to win every match with in 2 straight games.

Bailey, the No. 1 ranked USA player among 14-year-old girls, played well on her singles competition but was ousted in the semi-finals against Lucia Gonzalez of Mexico. Lavely is the No. 4 ranked US player in this division but did not qualify to play in the singles.

Lavely trains at LifeCenter Plus in Hudson, where she is coached by brother Dan Lavely. She is also a member of the Woodridge girls soccer team. She plans to take a break from racquetball training to concentrate on indoor soccer this winter, but then will resume training for the Junior Nationals competition this summer. She remains in the Girls 14 division in 2010 while Bailey moves up to 16's.

article by Fallsnewpress.com
Posted by Mauro at 4:49 PM