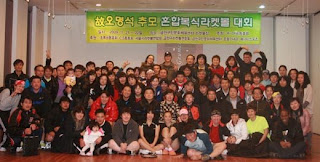 When does the love for the sport end as a racquetball player? Many players who are injured or have been told that racquetball can damage them further if they continue to play, still can’t stop playing because their love for the sport. Mr. Oh Young Tek is a Korean racquetball player who was first diagnosed with cancer in 2003 and fought hard for many years before passing away in December of 2008, leaving behind a wife and son.

Throughout his battle with cancer he continued to play and work hard for the development of the sport, and had expressed a desire to have a tournament bear his name. His wife and the Gum Cheon Racquetball Club hosted a memorial mixed doubles tournament in November 2009, which brought over 100 players together and reminded them all that they should work diligently for the development of racquetball. He will be forever missed by all Korean racquetball players

Item submitted by Yuni Cobb.
Posted by Mauro at 5:04 PM