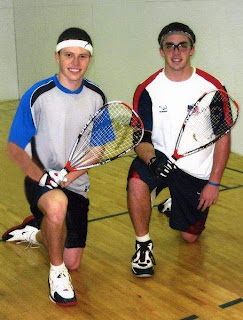 Zach Apperson and Nick Bryan of Zanesville -- 2006 graduates of Rosecrans High School -- teamed up in doubles for Baldwin-Wallace College and were champions in the Mid-East Racquetball Conference (MERC) Tournament.

Bryan also is a three-time All-Ohio Athletic Conference golfer for the Yellow Jackets.

The Baldwin-Wallace College seniors were the top seeds in the MERC Tournament. They were awarded a bye in the first round.

The semifinals saw them whip Chad McGuffey and Aaron King of the University of Cincinnati, 15-9, 15-4. In the title match, they won over Justin LaBelle and Galen Reding of Baldwin-Wallace, 15-9, 15-13.

Apperson also captured the MERC singles title, beating Don Lavely of Akton in the title match. He is a former state and national junior racquetball champion and has competed twice in the Racquetball Junior Olympics.
Congratulations Zack and Nick

article by: Zanesvilletimesrecorder.com
Posted by Mauro at 6:12 PM