Racquetball is the way to go 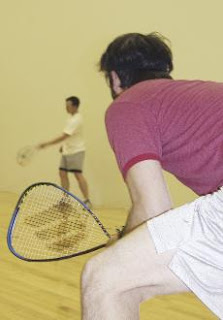 Known as the best racquetball player at Guilford, Physical Education Center supervisor Mike Merkel began playing in 1978 after taking a beating from one of his former girlfriends.

"I thought because she was a girl I would beat her," said Merkel. "She kicked my butt." Merkel began practicing up to seven hours a day over the next five years. "Because of all the YMCAs in Illinois, I could play after I worked," said Merkel.

Merkel played in pro-ams across the country until one fateful day when he lost to a 12-year-old in a match. "I had a realization after that match that I had reached my potential," Merkel said.

After taking considerable time off to let his mental wounds heal, Merkel got back on the horse and now plays several times a week.

"Racquetball is a lifelong sport and a great game," said Merkel.

Men's head soccer coach Jeff Bateson began playing at Alma College in Michigan and, like Merkel, he got his butt kicked the first time he played.

"Racquetball is just a fun sport in general," said Bateson. "You learn something new every time you play."

Bateson especially enjoys just being on the court, and uses racquetball to stay in shape.

Men's associate head basketball coach Matt Parke began his racquetball career in 2000 when he and his friends were driven from tennis by cold weather.

"What I like about racquetball is that it's a game that anyone can play, but that is very hard to master," said Parke. "There's always another shot to learn or move to make."

Parke also said he enjoys racquetball because it's good exercise and a way to keep in good shape. Parke describes his favorite times playing racquetball as any time he beats his fiancée Liz Dornbos.

"I enjoy the action," said Dornbos. "You're always moving and trying to make shots."

Dornbos plays mostly with Parke and said she especially enjoys hitting the perfect shot. That is, hitting a shot which bounces off a sidewall, then the front wall, then dies before her opponent can reach it. Her favorite times playing are whenever she can score on Parke.

Senior Chet Levine got into racquetball through his high school squash team.

"I had played sporadically throughout high school," said Levine. "I was the captain of my squash team so I learned about racquetball through some of my teammates."

Levine enjoys racquetball because of the competitive nature of the matches.

"I also love finding activities where you can get a workout and have a lot of fun in the process," said Levine.

Levine is currently riding a scintillating four-match win streak and has no problem letting his competition know about it.

"It has been pretty nice to rub that in the face of my opponents," said Levine.

article by-Will Cloyd, The Guilfordian
Posted by Mauro at 6:08 AM