Health benefits of racquetball a pleasant side effect 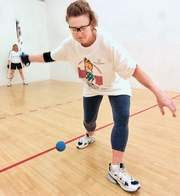 Rick Chrys Anklam serves the ball against Sharon Hunter during a game of racquetball at the Woodson YMCA in Wausau.
Drury was a junior in high school when his father taught him how to play racquetball.
Drury found the game to be an addicting mix of speed, strength, and physical and mental agility, and it has been a part of his life ever since. The 51-year-old Rib Mountain man is a certified coach, instructor and referee, and the game has helped him stay fit. A knee injury -- not related to racquetball, he's quick to point out -- temporarily has him sidelined, but he's aching to hit the court again.
"It's a lot of fun," Drury said. "There's a lot of camaraderie, and I've developed a lot of friendships on the court.
For many people, a bout of exercise is a chore. But for racquetball enthusiasts, the game is so enjoyable that fitness is an afterthought, a side effect.
Make no mistake: Racquetball can get a person in good shape. Drury quotes USA Racquetball statistics that put a rousing game on the same plane as running at a 10-minute-per-mile pace or a session of vigorous aerobics.
There are, however, some fitness caveats regarding racquetball, said Corey Huck, an assistant professor at the School of Health Promotion and Human Development at the University of Wisconsin-Stevens Point.
Players need opponents who are around their same skill levels to get a quality aerobic workout session. If one player dominates another, neither works up much of a sweat.
But if players are matched well, there's plenty of running, stopping, jumping and lunging, and the game offers a lot more than just a heart-healthy workout session.
"It helps with neural adaptation," Huck said. "It stimulates faster connection between brain and muscle movements."
It also means the body's nervous system incorporates more muscle fibers in a given movement, and that can help an athlete off the racquetball court. A person develops quicker reflexes, and becomes generally stronger. It can even help runners develop a more efficient stride, Huck said.
Racquetball is a fitness mainstay for Shirley Hughes, 53, of Junction City, but she augments it with sessions on the StairMaster and yoga.
She finds racquetball satisfying on so many levels.
"It's nice to hit something, and it's OK to hit something, in this case," Hughes said. "It's competitive, and I like that."
She especially likes it when she soundly beats a man 20 years younger.
"It's a blast," Hughes said. "It's awesome."
Posted by Mauro at 3:01 PM