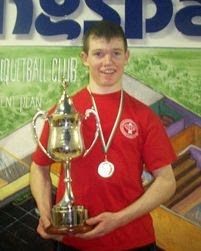 In one of the closest Mens Singles finals ever, Joe Dillon of Kingscourt was crowned champion before an enthusiastic home crowd at Kingscourt Hadball & Racquetball Centre last weekend. Dillon defeated Sean Keane(Fermoy) on a score line of 14-15, 15-14 and 11-10. The match ebbed and flowed throughout with never more that 2 points separating the contestsants at any point. In the tie breaker both players had opportunies to seal victory but it was Dillon who got the winning point on his fourth attempt.

Clodagh McManamon(Newport) took over from her twin sister Ciara who was the defending champion to win her first Nationals Singles title. She defeated Donna Ryder also from the Newport club in Co Mayo by 2 games to 1.

Another notable achievement over the weekend came from Ray Breen of Arklow who won both the Mens Novice Singles and the Mens D Singles. Niall Nevin(Fethard) was the winner of the Mens C while Ruardhi O`Rourke from the home club won the Mens B Singles. Majella Haverty(Castlebar) won the Womens B title and Elaine Murphy(Templederry) is the new Womens Novice Champion. In the Juniors, Sean Keane took consolation in defeating Dillon while Aisling Hickey(Rossmore) is the new Girls Under 18 Champion.

More Irish News at www.racquetball-ireland.com.
Posted by Mauro at 3:14 PM