Junior from Texas signs with ProKennex 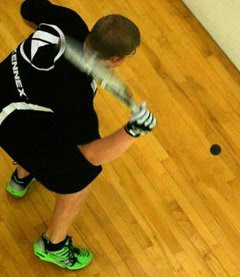 David Ryon plays racquetball at the YMCA by himself on Wednesday. Ryon participates in out-of-town tournaments and recently got a contract to represent ProKennex.

David Ryon had no idea when he first walked into a racquetball court that he'd have such a hard time walking out.

Ryon took up the sport to pass the time between football and baseball.

He no longer plays football or baseball, but is ranked among the top 60 junior racquetball players in the nation and the top 10 in Texas and recently earned a sponsorship from Pro-Kennex.

The junior at Memorial placed second in the men's C Division and reached the finals in the 18-and-under division before losing to the nation's top-ranked player at the prestigious Longhorn Tournament in Austin earlier this year.

He's preparing for the United States Association for Racquetball national tournament this summer in Houston.

"It's hard to explain how fun the sport is," Ryon said. "I think what I like about it is you have to depend on yourself to win. It's not anybody else's fault if you lose. You know it's your fault."

Ryon has won more than he lost since he took the suggestion of his father, Mark, and signed up for a racquetball course taught by Bill Dunn at the Victoria YMCA.

"He came in a said he wanted to try it and I knew he was an athlete," said Dunn, who has won his share of national titles. "We noticed he hit the ball harder than anybody we had seen, but didn't have the slightest idea of where it was going."

Ryon learned how to control his shots through hours of practice. He spends at least five days a week on the YMCA courts, either playing or practicing.

"For certain shots, I'll do 100 for the backhand and 100 for the forehand," he said. "Then, I'll move to a different shot and do the same thing over and over again. It's a whole lot of repetition."

Ryon's success in racquetball came quickly. He started playing in 2007 and won his first tournament at the YMCA in 2008.

He was invited to the Elite Junior training camp at Baylor University in Waco in 2008, and competed in the USA Junior Olympics Racquetball Championships in Michigan last year.

Ryon has learned to balance the time he spends playing racquetball with doing his schoolwork and spending one weekend a month in Corpus Christi fulfilling his obligation to the National Guard.

Ryon's biggest improvement has come in the thinking part of the game.

Ryon description of racquetball is an indication of how much he values the mental part of his game.

Ryon prepares for tournaments by studying his opponent and the court where the match will take place.

"When I'm competing, I'll go through what needs to happen in my head," Ryon said. "It used to be I'd be talking to myself telling myself what I needed to do and when it didn't happen I would get further and further down on myself. It helps just to stay positive.

"You kind of talk yourself through the shots what you need to do. You have certain shot selection for whatever they may come at you."

Ryon's sponsorship with Pro-Kennex not only helps him acquire equipment it also gives him an edge at tournaments.

"It's partially a matter of respect," Ryon said. "People see you walking around with all the gear and they can tell this guy means business. He knows a little about what he's doing or they're intimidated. If you're going to intimidate somebody before the match, that's half the work done."

article by: Mike Forman is a sports writer for the Victoria Advocate. Contact him at 361-580-6588 or mforman@vicad.com, or comment on this column at www.VictoriaAdvocate.com.
Posted by Mauro at 2:42 PM