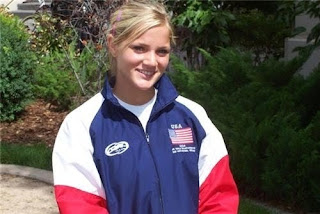 After winning two gold medals at the National Collegiate Racquetball Championships earlier this month, Jackson is out to become the No. 1 player on the adult tour. She is now a member of the United States Adult Racquetball Team.

Having played since she was 5 years old, Jackson is a member of the D-I University of Alabama's racquetball team. She has won six national titles in the past year-and-a-half, and has competed in several professional and college tournaments while at Alabama.

Overall, she has won 23 national titles and one world racquetball title, earning her a No. 20 national ranking and No. 28 worldwide.

Jackson said she wants to help lead her team to a national championship after finishing runners-up last season. Individually, she also envisions a No. 1 singles championship and a doubles title with teammate Kara Mazur.

The daughter of Shelbyville's Frances Jackson most recently competed in the National Collegiate Racquetball Championships in Springfield, Mo., on the Missouri State University campus. She won the Division 1 women's singles and doubles titles.

Play began on April 7 and lasted until April 10. Jackson was seeded No. 2 on the draw of 27 participants. She placed first last year in the No. 2 division, giving her the No. 2 ranking in D-1. In her run for the title, she defeated girls from universities in Utah, Iowa, Oregon, and in the title game from Arizona State University. In the final match, Sharon was behind 8-2 in the first game, but rallied to a 15-10 victory.

The second game was hard-fought, but she won 15-8 for the D-1 women's singles title. She also competed in the doubles division with Mazur and defeated girl's teams from University of Oregon, West Point, University of Cincinnati, and Baldwin Wallace of Ohio. The duo won the title 15-5, 15-6.

There were 349 participants in the tournament from 50 colleges around the country and world. Each college team consists of six men and six women who can participate in singles and/or doubles divisions.

Jackson played the No. 1 spot in the women's division. The men and women D-1 single winners would represent all college students on the United States Adult Racquetball team.

Jackson's accomplishments have opened more doors for her. She is preparing for the adult tour in Houston, Texas in late May.

The USA Racquetball team participates in the Pan American games and the International Racquetball Association World tournament. The team also travels to several other countries to compete as a team.

Jackson said she enjoys meeting people from around the world and that it makes her a more well-rounded person.

"It's really fun getting to know people from other countries," she said.

In the professional racquetball divisions, the speed of the ball can reach 200 miles per hour, with balls going one-eighth of an inch from the floor for a "kill shot," it makes it difficult to watch on television. Much research has been done on the color of the ball, and other aspects of the game, for better viewing.

In some South American countries, racquetball is the second most popular sport behind soccer. Participation has grown more than 20 percent in the past two years. It develops coordination, great footwork, speed and quick reaction times. It also is a great cardiovascular workout, burning 700 calories an hour.

Jackson said she has spent many hours at the Shelby County Athletic Club on the racquetball court, which also helped her speed and quickness for other sports.

"I just love working out," she said of staying physically fit all-year round. "I'm a self-motivated person."

Part of her motivation lies in preparing to face top players from around the world, including Paola Longoria from Mexico.

"It makes me train a lot harder," she said.

She also competes on several intramural teams at UA, is an officer of the Alabama Racquetball Team and is a coach for the "Rumble Racquetball Camp," held each summer at UA.

Her major is business with a pre-med minor. In the near future, she wants to pursue a career as a chiropractor.

Jackson has appeared on the president's list (4.0 GPA or above), and is a member of three college honor societies. She was just selected for the Alabama Business Honor Society, which allows only the top two to five percent of all UA business students.

Jackson said she wants to thank her mother and the Al Taylor family for their support.

"I'd like to thank my mom for supporting me," said Jackson. "She's only missed two tournaments, ever. She's my biggest fan."