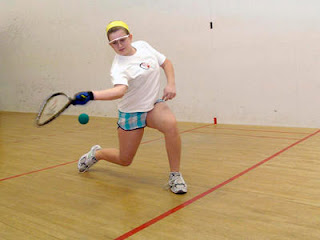 Kira Brereton gets ready to hit the ball during a racquetball practice at the Racquet & Fitness Academy. The 13-year-old athlete won the provincial raquetball championships in March and will be competing in the nationals at the end of April
Kira Brereton is, in most respects, just your average seventh grader - she's loves Facebook, she's addicted to her new iPhone, and aspires to become a marine biologist one day.
But on the racquetball court, the 13-year-old Hollycrest Middle School student shows a focus and talent way beyond her years, said her coaches.

"She's motivated, she's passionate, and she's willing to put in the hours. She's a tough cookie who works hard - a coach's dream," said Sue Swaine, who, along with Tony Dawson, coached Kira to her second consecutive provincial junior championship in Kitchener late last month. "There's not many others Kira's age playing at her level - maybe only six in the province."

"It's her ability to focus when it comes time to play that is one of her biggest assets," added Dawson. "Plus, her serve, for her age, is very, very accurate."

Next up for the humbly talented teen is the Canadian Junior National Racquetball Championships in Burlington later this month. There, from April 26 to May 1, she and the rest of her team at the Etobicoke Racquet and Fitness Academy will vie individually for the chance at a spot on the junior national team.

"If I can do that, it would mean I worked really hard and achieved my dream," Kira said between practice matches this week at The West Mall-area academy, where she trains two to three times a week.

The run-up to the nationals, she said, has brought with it a whole new focus to her game.

"I'm not training more often, but I am training harder, more intensely. I'm a lot more focussed," she said. "I don't get nervous, just more focussed."

Formerly a competitive figure skater, Kira took up racquetball just four years ago, following in the footsteps of both her mother and her brother. It was the sport's individual play that attracted her initially, but its competitive fun and cardio workout have kept her hooked, she said.

While often compared to squash, racquetball has its own set of unique rules and characteristics that set it apart - the rackets are shorter and wider, the balls are bigger and bouncier, and there are less restrictions on playable surfaces within its enclosed court, among other differences.

It's also an intense sport that, if not practiced in moderation at a young age, can lead to premature burnout amongst even its most talented athletes, said Swaine.

"Racquetball is a later development sport. Athletes don't usually peak till they're in their late teens, so what we try to do with younger players is encourage them to take a break from racquetball in the off-season (usually from May to August)," she said. "They need to get away from it, otherwise they'll burn out both physically and mentally."

"Kira's one we had to hold back from playing all summer - it had to be forced upon her," Dawson added with a laugh.

Confident all their young charges will do well at the national's, both Swaine and Dawson said they were hopeful Kira could bring home the girls singles national title in the 12 and under division.

"The most important thing, though, is that we all support each other and play as a team, even though it's an individual sport," Swaine said. "If someone is on the courts in competition, we're all there cheering that person on."

article by: CYNTHIA REASON insidetoronto.com
Posted by Mauro at 7:24 AM