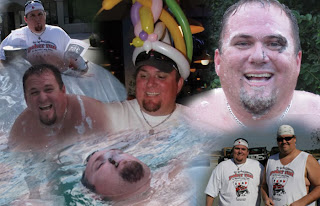 SEBRING -- Gold Gym's Winter Haven is teaming up with its facility in Sebring to host a racquetball tournament in order to support the Bratten family.

Jake, as he's known to his friends and family, was involved in a motor vehicle crash on Feb. 23 while on his way to work. During the crash he was thrown from the vehicle and suffered from crushing injuries to his pelvis and leg.

As a result of the crash, Jake was flown to Lakeland Regional Hospital where he was immediately prepared for surgery.

During these surgeries doctors had to remove his severely injured leg in order to save his life.

He has endured many surgeries to help repair his crushed pelvis. Once "Jake" has finished all of his surgical procedures there will be the long arduous task of recovery.

Jake's first job in the realm of law enforcement was working for the Department of Juvenile Justice (DJJ). He worked for the DJJ for eight years before meeting and marrying his wife, Amy. Jacob and Amy were married in March 2002 and went to work for the Avon Park Police Department as a Police Officer in April 2002. After working as a Uniformed Police Officer for three years, he was transferred to Criminal Investigation Division (CIU) in 2005. While working as a Detective in CIU, Jacob and Amy adopted Regan (13) and James (11) in July 2007. After working as Detective for two years, he was promoted to Sergeant, where he was then reassigned to the Uniform Patrol Division and is currently still assigned.

Deadline for sponsorship is Friday, April 16.

Tournament will be pool play within appropriate division preceding a single elimination bracket-style finals round.

Matches will start 5 p.m., Friday, April 30 and will continue through Saturday.

Start times will be e-mailed out Wednesday, April 28 after 7 p.m.