How to stay out of your opponent's way 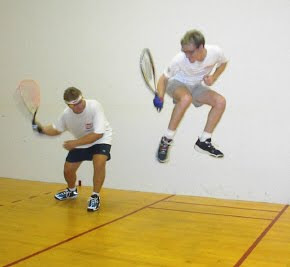 Racquetball rules require you to get out of the way of your opponent's shots. There's no exceptions.

You cannot stand in the way of your opponent's shots.

This is a big deal, it's very important, and the game simply does not work when a player's shot is blocked. When you stand in the way of your opponent's shot, it's a form of cheating.

When the rule is observed, then the game runs very smoothly and is completely fair.

If you don't give your opponent enough room to swing, or stand in the way of his shot, the rules state that you lose the rally. Your opponent doesn't even have to swing and hit the ball, if you're in his way, then a referee can award the rally to your opponent. The reason the rule prescribes such strong punishment for infractions is that there is no level playing field when a player blocks his opponent's shot. The actual rule is displayed at the bottom of this page.

This is not some vague rule that only pros have to know about. Every player should observe this rule and all beginners should be taught this as the first rule they learn. The purpose of this rule is to make the game fair.

How much room must you give your opponent?
A. You must let the opponent swing (including his backswing) so that his racquet doesn't hit you.


Why are you standing in the way of your opponent's shots?
You don't look behind you to see where the ball is, and when it wraps around directly behind you, you don't see it. Then your opponent can't take the shot that he is legally entitled to since you are blocking his shot.

Let's examine a common situation. Often you will hit the ball in a manner that has it bounce against a side wall, while you are backing up staring at the front wall, not looking behind you. Your opponent is trying to chase down the ball. The ball then angles towards the middle of the back wall, comes out to where you are standing, one inch from your behind. Your opponent, having chased the ball from the side wall, whirls around from the back wall to face the front wall so he can finally reach the ball before it bounces twice. At the very last second, he suddenly sees you backing your butt into the ball, while you are oblivious of the fact that you've hit the ball so that it's about to hit your butt. He must then arrest his instinct to follow through with his swing, or else his racquet will plow into your back. You obliviously keep backing up, not aware of the scene that is unfolding behind you, and the ball bounces off your butt. You then turn around and ask "oh, was I in your way?"

This is absolutely wrong. Your opponent has the right to expect the path in front of the ball to be clear.

Why don't you turn around to see where the ball is going, so that you can intelligently move out of the way? Ah, here is where many people make their mistake.

Either someone told you to face forward so as not to get hit in the face with the ball, or you instinctively started doing this on your own. Getting hit is an extremely important consideration, but turning your back to the hitter does not work to solve this problem. If you don't look to see where the ball is going, there is actually a bigger chance that you will get hit by the ball or worse, the opponent's racquet. Not watching the ball is the most common mistake people make.

Fear of getting hit by an errant ball is a very powerful obstacle to overcome, especially if you have been hit. The rest of this article will show you how to avoid getting hit, but you will not have to perform any brave act or take any risks.

First things first: make sure that you wear approved racquetball safety glasses. Don't play without them.

To watch your opponent hit the ball when he's behind you, don't turn around so completely that your toes are pointing towards the back wall. Your toes should be pointing towards the front wall corner closest to the side of the court that the ball is on. Your body is kind of facing the front wall diagonally while your head is turned around, looking over your shoulder.

Now, if the ball works its way towards you, you will see it coming ahead of time. All you have to do is move out of the way and let your opponent swing. It's a liberating feeling. Your opponent will appreciate your court awareness and be more inclined to play with you in the future.

Let's see if this works under the most difficult situation. Assume that you serve a lob, and your opponent unexpectedly cuts off the lob by short hopping it. He mis-hits the ball and the ball accidentally goes flying at your face.

The key to good protection is watching the ball through the strings right after you've hit it, not when you think your opponent will hit it. Opponents often materialize out of nowhere and sometimes hit the ball in an illogical manner. Sometimes the ball hits the frame of their racquet and comes at you from a 90 degree angle. So having your racquet shielding your face right after you've hit it covers these unexpected shots.

If you are not comfortable watching the ball like this, practice by having a friend from back court lightly hit the ball around the court for 10 minutes while you just watch from center court (through your racquet strings), and build up your skill level and muscle memory. Make sure to practice moving out of his way if the ball is directly behind you. You can move out of his way now right? Right, because you're now watching the ball through your racquet strings!

If you don't watch the ball, it's as though you put a paper bag over your head immediately after you hit the ball, then wander in front of your opponent's shot. This is immensely frustrating for your opponent and is completely unfair to him.

Is there a time when you should not watch the ball? Yes. There's only one situation where you should not watch the ball. This is when you accidentally hit the ball so that it comes very close to your head. Let's say that you are standing in front court and hit a defensive lob, and the ball, coming down from the ceiling, is very close to your head. In this case, don't turn around at all. Your opponent may lose sight of you and try to short hop it, and if you turn around, he might hit you in the face with his racquet. Do not watch the ball if any part of is flight path goes near your head. In this case, face away from your opponent and move your head quickly far away from the ball. Once it's not near your head, look around and make sure that you are getting out of the way of your opponent's shot. Of course you shouldn't hit the ball back at your own head, especially if your opponent is standing near you, but this occasionally happens unintentionally.

One other defensive trick. If you get trapped, let's say against a back wall corner, and your opponent doesn't see you and is about to hit you. Yell "stop!" very loud. If you watch the ball though, you will greatly decrease the chances of this situation arising.

To watch experts stay out of each other's way, buy a video of a professional game; although they don't hold up their racquets as shields every time, they will do it when they recognize a potential situation for getting hit. They expertly stay of the way so well that I've rarely seen a pro get hit by a ball. Watch where the receiver stands; he will always give the hitter the straight in and cross court shot because he's watching the ball behind him. That's what you want to do.

One other thing about watching the pros on video, don't watch the ball, but rather watch one player (regardless of which one) and see where his eyes are throughout the rallies. You will notice that his eyes are always on the ball.

Once you get this concept down, you will find that your game goes up a level, and more of the higher level players will be willing to play with you.

A benefit of watching the ball is that, because your opponent will be where the ball is, you will be able to see what he is up to, which makes you set up much more intelligently. That's right, you will automatically look smarter. When you watch the ball come off the strings of your opponent's racquet, you will react twice as fast to his shots. This is a powerful new skill.
Posted by Mauro at 9:49 AM