Racquetball: a game for all ages at Purdue University 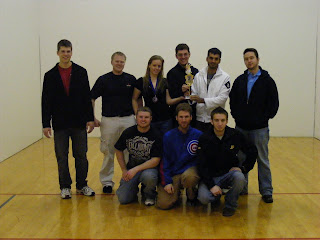 Players ages 19 to 64 came out to the Fitness Center on Wednesday, April 28, for the intramural program's annual one-on-one racquetball tournament.

The tournament consisted of players who were relatively new to the sport, to veterans like Dave Nalbone, a PUC faculty member with 30 years of racquetball experience.

The tournament was broken up into three brackets: A, B and C.

The tournament began with each participant playing one game to 15 against every other player in their bracket.

At the end of this round robin style play, the top two players in bracket A and bracket B/C faced off in the championship games.

While the championship games, which were also played to 15, were played in a best of three format, both games were won in just two matches.

"The competition was good," graduate student and champion of the B/C bracket Srikar Beemagouni said.

Beemagouni is currently enrolled in a racquetball class with other beginners for PUC credit. The class, instructed by a racquetball veteran, teaches basic skills.

Nalbone, champion of the A bracket, agreed competition was intense all day. Nalbone has played in this tournament for several years and has taken first multiple times, despite having to settle for second place the last two years.

"All of the games were tight. It was good exercise and a lot of fun," Nalbone said.

The oldest player in the tournament was Ed Vockell, a professor at PUC, who competed in the A bracket where his experience made him a force to be reckoned with.
Posted by Mauro at 7:16 PM