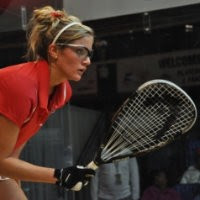 Team HEAD’s arsenal of young players showed its muscle once again at the 2010 USA Racquetball Intercollegiate National Championships, held on the campus of Missouri State University.

With her win in the Women’s Singles division, Jackson earns a one year appointment to the USA Racquetball Adult National Team pool of players. Players from that pool will represent Team USA at all international and world competitions, including the International Racquetball Federation’s World Championships this August in Seoul, Korea.

Taylor Knoth, a freshman at the University of Oregon, shook up the Men’s Singles bracket en route to a second place finish. Knoth (Milwaukie, Ore.) knocked off the No. 3 and No. 2 seeds on his way to the finals. Taylor’s racquetball career has amassed 15 National Junior Titles, 4 Junior World Titles and 3 National High School Titles. His finish paced the Ducks to a fifth place ranking in the Overall Team competition, the highest ever for the school.
Posted by Mauro at 8:54 AM