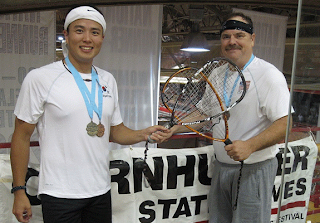 Jaekeun Cho, left, and Greg Swinney show off their medals after placing in the Cornhusker State Games racquetball tournament. Cho won a gold medal in Men’s C Division and they won as a team in Men’s B/C Division Doubles.

Jaekeun Cho and Greg Swinney went to Panda Express to get their pre-game fuel.

The team ate japchae, a Korean dish prepared with cellophane noodles, vegetables and meat, in honor of their team name — japchae.

Their meal was in preparation for the Cornhusker State Games, where the team would compete in racquetball.

Japchae may have been the right dish for the team, who had competed at the games twice before. This year, Cho won a gold medal in men’s singles and he and Swinney won a bronze in men’s doubles.

Cho moved to the United States from South Korea more than two years ago to attend the University of Nebraska at Kearney. Swinney and his wife, Cindy, are Cho’s host parents.

Swinney had been playing racquetball for many years and taught Cho, who had never played.

“When we first started playing I creamed him every time, and now when we play he smears me every game. He slaughters me,” Swinney said laughing.

Cho, who is also interested in cooking, made hot spicy chicken, a traditional Korean dish, for the Swinneys when he arrived in Kearney.

They didn’t even place.

“My first year I played miserable. I didn’t win any games. They smoked us,” Cho said.

Swinney and Cho won a bronze medal in men’s doubles that year. Cho said they lost every game, but won a medal because of the bracket outcome.

“We were the only team that had matching shirts, which is a little weird,” Swinney said laughing.

Cho won the gold medal in the Men’s C Division. As a team they won the bronze medal in Men’s BC Doubles.

“This year we won the bronze by actually winning,” Swinney said.

Opening ceremonies for Cornhusker State Games are Friday, but many events have already taken place.

Swinney said they are used to playing singles, so learning to play as a team was difficult.

“It took practice to learn how to play together. Who’s going to hit the next ball and not hurt each other when someone misses? When I missed, he never once yelled at me or got mad at me. He was very nice even when I missed the ball,” Swinney said.

The team practices at the YMCA twice a week.

Not only was winning the gold difficult for Cho as a fairly new player, he won the gold medal with a sprained ankle. He was injured while practicing two days before the competition.

He said he put ice and heat on his ankle in hopes of bringing down the swelling, and took ibuprofen and wrapped his ankle on game day.

Cho played 16 games in one day to win the gold medal.

He is now qualified for the national competition in Colorado Springs, Colo., in October.

“I’m really proud of Jaekeun for being so disciplined with his athletics, and his academics too. He’s a 4.0 UNK marketing student,” Swinney said.

Cho will graduate in December and plans to attend graduate school.

He hopes to eventually return to South Korea and continue to compete in racquetball.

Cho and Swinney celebrated their Cornhusker State Games victories by returning to Panda Express for a second helping of japchae.
Posted by Mauro at 4:02 AM