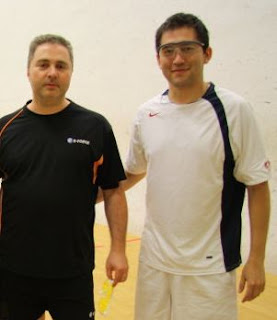 Philippe Lecomte (France, left) is the winner of the 2010 French Open that were held last weekend in Paris for the 27th time. Lecomte defeated José Ricardo Verduguez from Bolivia with 15-9, 15-2. It is Lecomte's first French Open victory and in fact the first time that a male French player won at the prestigous French Open. Lecomte also finishes the 2009/2010 season as No. 1 player of the European Mens Singles Rankings. The French Open were the last tournament of a successful 2009/2010 ERT Tour with 12 sanctioned events in 7 European countries.