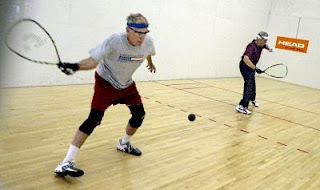 Other events this weekend include table tennis, push-ups, bowling, men's basketball and swimming.

More than 2,000 older athletes are converging in the city for the Senior Olympics events, which are hosted by the Pasadena Senior Center and will last through June 28.

The California State Senior Olympic Games is the only qualifying site in the state for the 2011 National Senior Games in Houston.

"They're going great," said Cynthia Rosedale, Senior Olympics coordinator. "People are happy. In so many of the events, we've really raised the bar as far as quality goes."
Posted by Mauro at 5:32 PM