Summer Barbecue Racquetball Shootout Is Back 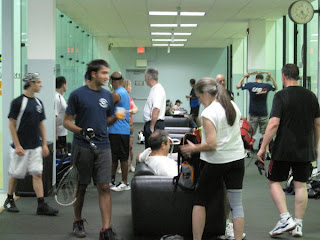 Summer Barbecue Shootouts have returned to Sportime Fitness and Racquetball in Syosset. Racquetball players and fans gathered at the sports complex on June 19 for the first of three tournaments.

"We hold the shootout every year, and we always get a great turnout," said event organizer Tom Keogh.

Over 60 participants came from as far at Connecticut and New Jersey to get in on the action. To add to the festivities, the complex held a barbecue and served refreshments outside throughout the day, which lasted from 10 a.m.-6 p.m.

The summer series attracts big names in the world of racquetball. Nick Montalbano, a member of the Junior U.S. National team from West Islip, won the singles tournament.

"I love the speed of the game and getting to meet new people," Montalbano said. "I met many of my friends playing racquetball over the past 10 years."

Montalbano won the Junior U.S. National Championships two years in a row, and he will enter Colorado State University in September on a racquetball scholarship. His father introduced him to the game.

The Sportime tournament provided an excellent venue for socializing and sharing in the sport. There was no preregistration, so participants were able to arrive in the morning, and individual games were arranged that day.

"The shootout games move a little quicker than a regular tournament," Keogh said.

Cash prizes and trophies were awarded to the winners. Of course, as with any sport there was competition, but everyone involved was there to enjoy the sport, meet new people and have fun.

The next shootout takes place on July 17. Players of every level are encouraged to attend. For more information, visit www.queensracquetsports.com.
Posted by Mauro at 8:54 PM