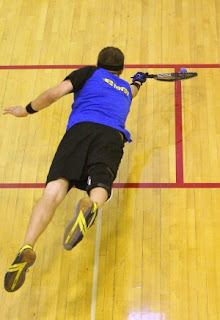 A couple of years ago, Kolten Wenckus was looking to get involved in a sport. One of his friends mentioned racquetball and Wenckus decided to give it a try.

He quickly got hooked on the sport. And became very good at it, too.

He’ll try to add another title when he competes this weekend in the Big Sky State Games. Wenckus will compete in the Men’s A singles and team up with Andy Ekblad in the Open Men’s doubles. Wenckus begins play at 11:30 a.m. at the Billings Athletic Club.

Racquetball fills a need for the 2006 Billings West graduate, who gave up motocross after sustaining numerous injuries.

“What happened was I had been motocross racing for the last five years,’’ Wenckus said. “I had to give it up because of injuries. I broke my back twice. I needed to find a single-person sport. One of my buddies told me about racquetball.’’

It didn’t take long for Wenckus to fall in love with the sport.

“I wasn’t very good, but I got a coach (Matt Majxner) and I played it six days a week for a couple of hours a day. I went to a state tournament and I met a bunch of great people. I wanted to get good so I could be with these people.’’

Wenkus, who is a student at Montana State University in Bozeman and wants to become a dentist, is juggling racquetball with a busy schedule this summer.

“I try to force myself to practice a couple of hours a day, either in the morning or the afternoon,’’ he said.

That can be a challenge.

“I’m working four different jobs,’’ Wenckus said. “It’s crazy. I work two jobs during the school year. I’m in pre-dental which is the same as pre-med. My mom was a dental assistant and I was always spending time around a dental office. The No. 1 thing is I want to help people. I have good hand-eye coordination and I thought that being a dentist would be up my alley.’’

Wenckus, of course, isn’t into helping people much on the racquetball court.

Considering the fact Wenckus has only played the game for 18 months, he might have to invest in a good-sized trophy case.
Posted by Mauro at 4:10 PM