Thanks to E-Force & Ron Grimes! 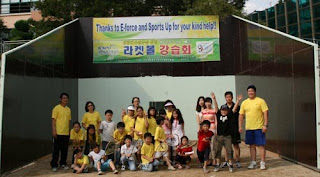 Most in the racquetball community know Ron Grimes as an owner of E-Force, and an entrepreneur who is dedicated, and knowledgeable. But Ron has a completely different side that most people don’t know about. He has a great heart, and during the last ten years that I have known him, he has done numerous things that nobody knows about and he always wanted to remain anonymous.

He gave donations to help pay for a female Korean junior player who is deaf to play at the 2007 World Junior Racquetball Championships. He also donated several pieces of equipment to a Korean church that provides space for underprivileged students for an after school program (the picture shows the children that Ron helped). He also sent Tim Doyle and Chris Crowther to Korea to give classes to remote areas of Korea to promote racquetball which helped increase the number of racquetball players. They also trained several Korean racquetball instructors to become better teachers. I have no doubt that Ron’s efforts to help Korea these last 10 years is one of the reasons Korea can host 2010 World Racquetball Championships
Posted by Mauro at 9:55 PM