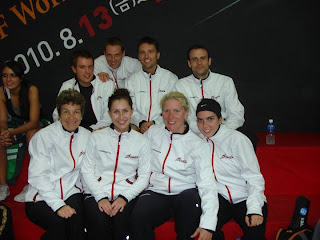 Both the men's team and the women's team lost their final 3-0 to the defending champion United States.

In men's action, American Jack Huczek defeated Montreal's Vincent Gagnon 15- 13, 15-6 and American Rocky Carson got past Kris Odegard of Saskatoon, 15-10, 15-7. The Canadians forfeited the doubles match to the U.S.