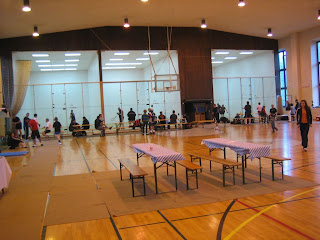 The European Racquetball Federation (ERF) has granted the 2011 European Championships to Bad Tölz, Germany. It will be the third time after 1990 and 1999 that Bad Tölz will host an ERF event. The date for the EURO 2011 has been provisionally set for the first week of August. Bad Tölz is a town in Bavaria, Germany. The city sits on the Isar River, 670 metres above sea level. Bad Tölz is known for its spas, historic medieval town, and spectacular views of the alps. It is appr. 50 km south of Munich.

ERF President Erik Meyer (Belgium) thanked the German Racquetball Federation and the local officials in Bad Tölz for their willigness to host the Europeans 2011: "Bad Tölz is a wonderful venue for our major event. We have had great events in the past and in 2011 we expect nothing different", Meyer said.

Players from 10 nations are expected to compete in Bad Tölz next year. The EURO 2011 consists of three major competitions: With the Open Individual and National Team Competition for Men and Women and the Senior Competitions in various divisions (30-85 years) as well as the Junior Championships (12-18 years), the three courts in Bad Tölz will be filled with many matches in just one week. A free day right in the middle of action will make sure that all players and delegates enjoy the great Bavarian hospitality with trips to Munich or Salzburg (Austria).

More information will be forthcoming in the weeks ahead.
Posted by Mauro at 7:16 PM