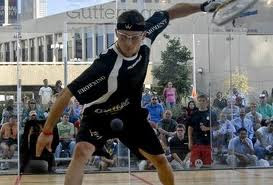 Waselenchuk has won 40 IRT tournaments through the 2009-10 season, and done that in only 80 tournament appearances for a remarkable tournament winning rate of 50%.

Waselenchuk has won five US Open Racquetball Championships, pro racquetball's most prestigious event, which is more than any other player (Sudsy Monchik is second with four US Open titles). He won it from 2003 to 2005 and in 2008 and 2009.[2]

2009-2010
Waselenchuk won nine of the ten IRT events in the 2009-10 season - defeating Jack Huczek in six finals and Rocky Carson in two and Ben Croft in another. He won 102 games and lost only 3, and did not face a tie-breaking 5th game in any match. The only tournament Waselenchuk didn't win was one he missed due to illness. In October, he won his 5th {{US Open Racquetball ChampionshipsUS Open]] title setting a new mark for most US Open titles by a man, passing Sudsy Monchik's 4 titles, and did not lose a game in winning the title.[1]

2008-2009
Waselenchuk went 49-1, with the only loss to Alvaro Beltran in the semi-finals of the California Open in January 2009. He regained the US Open title - his fourth, although did lose some games on the road to the final, including two in a tie-breaker win over Beltran. Waselenchuk finishes as the #1 IRT player for the fourth time, although he did miss three events
Posted by Mauro at 4:17 PM