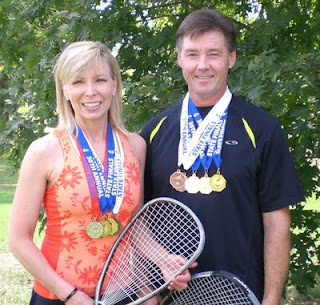 Four local residents will be among those competing in June 2011 in the National Senior Olympics.

The four — Nicholas “Doc” Newton, Sharon Gallaher, Terry Gallaher and Joel Sherlin — all took gold medals in their categories during the 2010 Tennessee Senior Olympics. To qualify for national competition, an individual must finish in the top three of the division.

Five years ago, Terry Gallaher had total knee replacements. He began to play racquetball after nine months in rehabilitation.

“I have to give credit to the Lord for blessing me,” Terry Gallaher said. “I really didn’t know if I would be able to play again after surgery. My surgeon was Dr. Timothy Ballard.”

He said, “I try to play at least five days a week, but really playing with my three grandchildren is the greatest benefit of the new knees.”

Newton said, “I beat my time by 2.5 seconds and set a new state record.

“It was fun. I love competing. Joining the Y and getting back to swimming has been wonderful for me,” Newton said.

He joined the Cleveland Family YMCA about seven months ago at the urging of his sons.

He noted he had been building up his strength in the Wellness Center and working with John McCormick, the lifeguard, on his strokes.

“We are very proud of Doc Newton,” Lee McChesney, Cleveland Family YMCA executive director, noted. “This is what the Y is all about. We help people meet their fitness goals while also providing a social network for making lasting friendships. Doc Newton is an inspiration to all of us and shows us daily how hard work and determination can be fun and rewarding.”

“I have found the Y to be a good place to meet interesting people and get back in shape and fit. This is a good program,” he said.

Newton said one of the great things about competing in the Senior Olympics was the support of the family and friends and the personal accomplishment of competing.

“My sons, Michael David, Nicholas James and Christian Arthur, have really been pushing me and encouraging me. They have been very supportive,” Newton said
Posted by Mauro at 6:55 AM