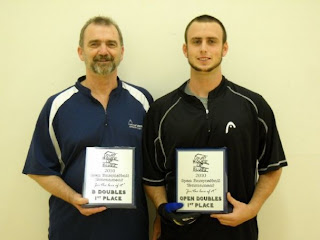 The Olive Branch Family YMCA is proud to announce its members' success at the recent Court House of Blues racquetball tournament.

Father and son duo Bob Lampley and Eric Lampley of Southaven took home honors in their divisions at the tournament.

Bob and his partner, David Gross, won first place in the B Doubles division.

The Lampleys have been playing racquetball for years and have competed in many local tournaments.

Additionally, Bob has provided clinics for YMCA members so that he can pass on his passion for the game to others who would like to learn.

Bob and Eric can be seen at the Olive Branch YMCA many days a week practicing their skills on the court.

Darlene Cunningham is the community outreach and development director for the Olive Branch Family YMCA.
Posted by Mauro at 10:32 AM