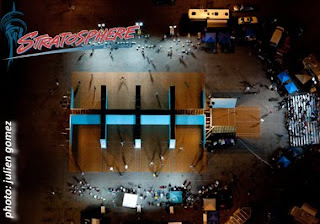 The World Outdoor Racquetball and the World Players of Handball converged on the Stratosphere Hotel, September 23-26, 2010 for the first-ever 2010 World 3-Wall Ball Championships in Las Vegas, NV. The parking lot on the world-famous Las Vegas Boulevard was transformed with the construction of 9 outdoor courts to host the richest outdoor event in the history of combined handball and racquetball. This was the first time that professional outdoor racquetball and professional outdoor handball have shared the same stage. Along with the professional divisions offering over $35,000 in cash prize money; amateur divisions for men, women, and junior players were offered in both racquetball and handball singles, doubles and mixed doubles.