Racquetball champ is also ambassador of good will to all 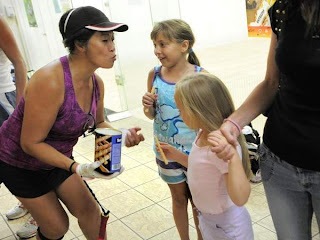 Lan Huynh, above, takes time between racquetball games to offer a treat to Reina Kostich, 9, and her little sister, Angelica Gonzalez, 5, at the Venice YMCA last week.
Lan Huynh plays in racquetball tournaments across the state and around the world.
At home, she holds court at the YMCA.
Her conversations are interrupted by a steady stream of hugs and kisses from friends of all ages. She carries plastic bags full of candy for children and tropical fruit and vegetables for adults.
"I'm like the mom for the whole world," she says, laughing. "I have something for everyone."
Huynh -- her name sounds like "Wing" -- is a 56-year-old native of Vietnam who speaks spirited English with a heavy accent. Her words are hard to understand, but most people are bowled over by her energy and enthusiasm.
She serves as a one-of-a-kind good will ambassador for the YMCA, racquetball and a general zest for life.
Jim Purdy, executive director of the Sarasota Y, calls Huynh "a joy to be around."
Robert Rietveld, her mixed doubles partner in Venice, admires her skill and tenacity on the court. Off the court, he has seen her work magic with all kinds of people.
"She is unbelievable," he says. "Probably the most caring and generous person I've ever seen."
Huynh and her family came to the United States following the Vietnam War. After studying accounting at college in Buffalo, N.Y. -- "Too cold," she says -- she settled near Seattle, where she met her husband.
They built careers, invested in real estate and raised two daughters.
Hyunh developed back problems after the birth of her second child. She gained weight and used a wheelchair for a while.
Posted by Mauro at 7:32 PM