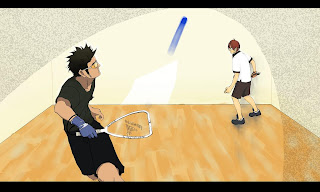 Three University of Wyoming club racquetball team members competed in the first tournament of the season last weekend, with two placing in their respective divisions.

The first intercollegiate tournament of the fall season was held at Lynmar Racquet Club in Colorado Springs, Colo., and sponsored by the Colorado Racquetball Association. Participating teams were the United States Air Force Academy, University of Denver, University of Colorado-Boulder and UW.

Kevin Schilling, chemical engineering senior from Casper, had two wins in his four matches in the B division. Charles Torrance, astro physics freshman, Cheyenne, took third in D division with two wins and one loss. Nancy Davidson, elementary education/Environment and Natural Resources program sophomore from St. Louis, Mo., placed fourth in the same division with one victory in three matches.

"I was pleased with how we competed. It was Charles' and Nancy's first college tournament and I was happy to see everyone come away with some wins," says Lena Newlin, UW club racquetball coach/adviser. "They all gained great experience and are excited to keep improving and competing."

The team's next competition is Oct. 17, at the University of Colorado-Boulder. UW will host a tournament Nov. 14, at Half-Acre Gym.
Posted by Mauro at 7:21 PM