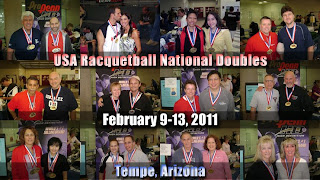 The 2011 USA Racquetball National Doubles Championships will be held February 9-13, 2011 in Tempe, AZ on the campus of Arizona State University. This is the sport's premiere doubles tournament and everyone is invited to play. The tournament is presented by Head/Penn and offers doubles divisions for skill, and age+skill for men and women. The 2011 National Doubles will also be offering a 'NEW' division, the Centurion Doubles, (Open and A skill division) the combined age of both players that must add to be at least 100 years of age or more. The division is used in Michigan, Texas and other states with great success. This allows a number of fathers and sons to play together as well as coaches and mentors with students.
The Men's and Women's U.S. Team Qualifying division also determines one-year appointments to the U.S. National Team that will be competing in international and world events.