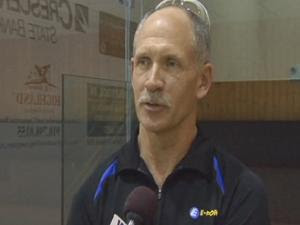 Steve Dayvault and Charlie Hauser used to play racquetball together on a regular basis at the Wilmington Athletic Club. In fact Hauser formerly served as the general manager of the club, but Hauser moved to California last year. Dayvault still calls Wilmington home though. The duo reunited last week. What a reunion it was !!

Dayvault and Hauser captured the open racquetball 55 and over national championship in Arizona. Upon his return to Wilmington, Dayvault said: "In the past if one of us played 80% and the other 100% we wouldn't win, but to win a national championship we both had to be on. We were on and every team we played in the tournament holds multiple national titles."
Posted by Mauro at 6:44 PM