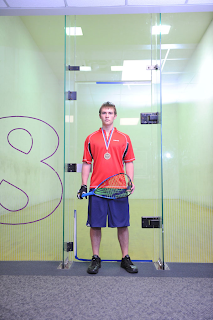 For most underclassmen athletes, just making the starting lineup for their team is an accomplishment.

Andrew Price, however, is his own team.

Price, a sophomore, recently won gold in the men’s single division at the Collegiate Regional Racquetball Championship. Competitors included teams and clubs from the Mideast region because SVSU does not have a racquetball team or club, Price was the school’s lone representative.

With his solo effort, Saginaw Valley finished third in the competition.

“There were probably around 16 players in my division,” Price said. “I won it pretty easily, but that’s just because it was a collegiate competition.”

Price regularly competes against the top amateurs and professionals in the country, achieving a national pro ranking of 96th during the 2009-2010 season.

Although Price said that he is currently “right around 100th” in the rankings for 2010-2011, he is the top amateur in Michigan, winning the state championship in the men’s open division in March.

“There were only six people [competing],” said Price of the men’s open division, which is just one step below professional competition. “A lot of people drop down a division, just because there are usually one or two people that win it every year.”

The state championship in the men’s open division was a first for Price, who was the runner-up in 2010.

Price, the top seed in the competition, cruised through the semifinals by winning his games 15-4 and 15-1, sweeping the threegame set. In the championship match, Price was faced with his first loss of the tournament.

For Price, who has previously won state championships in all other age divisions, athletic success has not come without its share of challenges.

“You’re traveling every weekend to go to tournaments, and it’s hard to manage classes,” said Price, who has travelled as far as California for competitions. “It’s pretty much like working a fulltime job. I’ll get home on Sunday night and have to wake up for class at eight in the morning.”

For Price, traveling is unavoidable if he wants to find athletes to compete against. He said the sport is far less popular in Michigan than other states such as Oregon or California.

“It’s not too popular, but it’s not like no one knows about it,” Price said. “In bigger cities like Detroit or Grand Rapids, they have a lot more players than we do in Saginaw.”

Because of the limited competition, Price trains in Davison at the Davison Athletic Club.

But one-on-one competition is only one part of Price’s training.

“I probably practice six to eight hours a week just doing court drills,” Price said. “I lift weights every day and do conditioning like running or biking.”

Because Price won the Michigan State Championship, he qualifies to compete in the national tournament, taking place in California on May 25th.

“It would be cool to win it all,” said Price, who is sponsored by Head/Penn Racquet Sports and Ashaway Strings.

Beyond the national tournament, Price’s success has him looking at a much larger scale.

“I might take a year off school and hopefully go on the pro tour,” Price said. “That’s my goal.”
Posted by Mauro at 7:03 AM