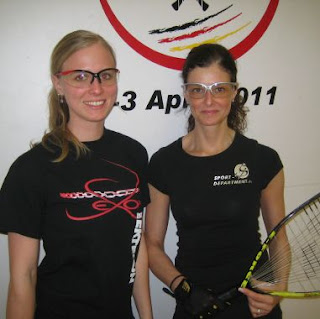 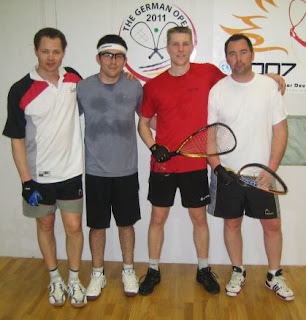 Hamburg's Lara Ludwig only lacked few points to the big surprise of this years' German Open 2011. In a close ladies' final, she was defeated by 8-time German Open winner and German National Champion Yvonne Kortes with 15-11, 1-15 and 7-11. A rather tiredly playing Kortes had more difficulties with Germany's young hopeful than expected. Though Ludwig's attempt to claim her first singles title was not successful, this years' German Open final speeks well for future matches between Germany's top players.

Quite a difference in the men's singles: Ex-champions Trevor Meyer and Joachim Loof had more or less no problems in their matches and reached the final again. However, both "oldies" were then unable to play the final match due to some extensive matches in singles and doubles. Therefore Trevor Meyer was anounced as the winner of the 2011 German Open. It is the seventh single title for him with who he catches up with the present record winner Martin Klippel. Klippel is currently unable to play major tournaments due to job and family obligations.

In the men's doubles final, Loof and Meyer dealt with the spontaneously put together Bolivian-German team Ricardo Verduguez and Arne Schmitz, but won relatively unthreatened with 15-7 15-7 to gain their fourth doubles title.

Participants from five nations took part in this year's 30th German Open. Even though registrations were below expactations, tournament organizers were statisfied with the general outcome of the event: „The number of participants from abroad have further decreased“, according to DRBV president Jörg Ludwig, „the reason is the general critical situation of our sport. It will be a goal to once again put together an attractive tournament for next year so that foreign players will make the fairly long to Hamburg. The 31st German Open take place in April, 2012 …

Results at www.germanopen.racquetball.de
Posted by Mauro at 1:11 PM