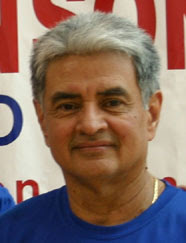 We are pleased to announce Daniel Rodriguez of Rustburg, Virginia as the recipient of the 2011 John LoMonaco Grant. Daniel’s winning application was chosen from among twenty applicants who competed for the all-expense paid trip to the 2011 Ektelon National Singles Championships presented by ProPenn in Fullerton CA, May 25-29, 2011. An anonymous friend of John LoMonaco made this grant possible, donating the funding for the trip in memory of Mr. LoMonaco, who passed away shortly after playing a match on May 5, 2009.

Daniel has been playing since the mid 1970s. He is an active volunteer in the racquetball community; serving as the Racquetball Coordinator at his local club. In that capacity, he has instituted challenge ladders, offered clinics, and served as the Tournament Director for both the 2nd and 3rd Annual YMCA James River Opens. As a result of his efforts, the participants in his club’s program have grown from a couple dozen to more than one hundred players.

Daniel has also been active at the State level, serving as the Secretary for the Commonwealth of Virginia Racquetball Association (CVRA). He is also the editor of the CVRA newsletter. He has remained competitive in tournaments, playing as many local events as his time and finances allow.

Daniel’s hard work and contributions to our sport demonstrate he is well deserving of this recognition. He has dreamed of playing in a premier event for over 35 years. Thanks to the LoMonaco Grant, his dream will be realized. Daniel will be reporting on his experience in an upcoming issue of Racquetball magazine. Please join us in congratulating Daniel for receiving this honor.
Posted by Mauro at 6:26 AM