Highlights from the AVSP Racquetball Tournament 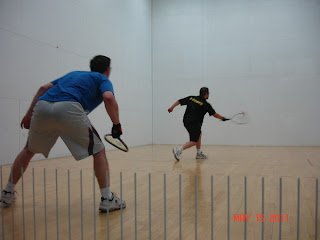 On the weekend of May 14-15, 2011, 12 weekend warriors competed in the first Ashburn Village Sports Pavilion (AVSP) Spring Racquetball Tournament. Tension was high since it was the first tournament at AVSP in seven years and a first tournament for many participants.

Play commenced on Saturday afternoon with the A and B matches in action. Mark Braithwaite is new on the racquetball scene, but looks like he was born to play the sport. With natural speed, athleticism and competitive intensity, he prevailed over Carol Snow and Ernesto Del Valle in the B division on Saturday, but lost two hard fought matches to Jose Lopez and Jason Greenfeld Sunday.

Ernesto suffered from an early calf injury from which he was unable to recover.

Carol Snow gets the award for best fitness and endurance over the weekend after playing four matches Saturday, three of which were back-to-back-to-back. During her fourth and final match, when many people would have reached their limits, she gave Greenfeld a run for his money. Using her pinpoint accurate Z serves the two remained neck and neck the whole game, but she ran out of steam late and fell to the eventual champion.

Jose Lopez, was the tournament’s “dark horse.” He hadn’t been seen playing racquetball at AVSP in more than a year. So when he signed up, no one knew what to expect. As a finalist in the B division, his quick feet, smart shots and casual serves gave him an edge. He played a spectacular match against Braithwaite on Sunday. Both men’s speed and agility made for long rallies, with Lopez eventually coming out on top. But the match may have taken all of the steam out of Lopez, who fell to Jason Greenfeld in the finals later that day.

Greenfeld, a veteran in the sport, has been out of the game for a while because of numerous hockey injuries. Although a little rusty, Greenfeld showed that he’s still got the goods. His power serving and hitting, and super accurate pinch shots were too much for everybody in the B division. His mental toughness showed during his match with Braithwaite. He was down 0-8 in the first game, but he pulled it together, overcame the deficit and defeat Braithwaite in two games. Greenfeld played a spectacular and dramatic final against Jose Lopez late Sunday. Greenfeld squeaked out victory in the first game 15-13, but fell behind, where he stayed the second game. He made a run toward the end, but it wasn’t enough. He lost to Jose 9-15. In the tiebreaker, it looked like Lopez had all of the momentum behind him, but Greenfeld focused and ran away with the championship after gaining an early lead.

The A matches were filled with hard hitting and power drive serves. The most exciting A match came from Wayne Speaks and Mike Hatcher. After losing Game 1, falling behind in Game 2, Hatcher looked like he was down and out. But then, in a courageous, effort he came from behind to win Game 2 15-14, pushing the match to a tiebreak. Speaks came through and pulled out the victory, 11-9. Despite their hard fought matches, both Speaks and Hatcher fell to the champion, Al Santiago. With his quick hands and shots from unorthodox places, he keeps his opponents off balance and guessing. He has been plagued with knee injuries over the past couple of years, but his performance this weekend showed that Santiago is back and is a contender against anybody on the court.

Late Saturday afternoon, tournament director Veronica Wilson took to the court with her longtime doubles partner, Mike Hatcher, to challenge Al Santiago and Wayne Speaks. There were some fast and furious doubles rallies. Santiago’s awesome front court play and unexpected cutting off ceiling balls, paired with Speaks’ hard-hitting shots and accurate serves, gave them the edge and they defeated Hatcher and Wilson to take the championship.

On Sunday morning, the C division was in action. Play started with James Martin against Ann Mattiucci. Game 1 was exciting. It looked like Martin was going to run away with the game. He was serving to win it with a big lead and Mattiucci fights off several game points and closes the gap. After several nail biting side outs, it was anybody’s game, but eventually Martin closed it out 15-13 and also beat Mattiucci in a hard fought Game 2. John Burke’s accurate drive serves and superb touch game were too much for Mattiucci and Martin this weekend. Although Martin put up a good fight with his speed and tough Z serves, Burke prevailed against all and ran away with the title.

The drama came to a peak toward the end of first day when a light fell and shattered in Court 1. No one was injured, however it left the court unplayable and the rest of the tournament was forced to finish with just one court. Wilson was worried, but all seemed to work out fine. Sunday matches were running a little late, but players expected to play back-to-back appreciated the rest and all was well.

Ashburn racquetball hopes to host another racquetball tournament at AVSP in the fall. For more information about the racquetball program at AVSP and how to get involved follow “Ashburn Racquetball” on Facebook, or email Veronica Wilson at enjoyracquetball@gmail.com.