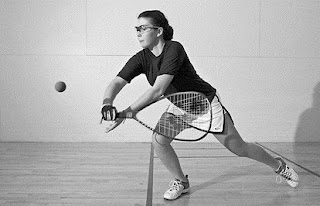 Montreal's Frederique Lambert will play for gold at the 2011 Junior World Racquetball Championships where she will meet a familiar foe.

Lambert beat Bolivian Adriana Riveros, 15-8, 15-8, in the quarter-finals and American Devon Pimentelli, 15-3, 15-5, in the semi-finals on Friday to set up Saturday's gold medal showdown with Maria Jose Vargas of Bolivia, who defeated Lambert during pool play earlier in the week.

Lambert is returning to the Girls U18 final for the second straight year after losing last time to American Aubrey O'Brien. This will be the last year she is eligible for the U18.

Lambert already assured herself of one medal, as she and Valerie Fallu of Brossard, Que. will be returning home with bronze medals in U18 doubles. They lost in the semifinals to Bolivians Maria Jose Vargas and Adriana Riveras, 15-8, 15-13.

The Girls U14 doubles team of Saskatoon's Daniel Drury and Michelle Morissette from Baie Comeau, Que., will also play for gold Saturday.

They advanced to the final after Costa Ricans Sofia Soley and Melania Sauma defaulted when Soley broke one of her fingers in three places when going for a shot in her singles match early Friday.

Drury and Morissette will play Mexicans Montserrat Perez and Diana Aguilar in the final.
On the boys side, Coby Iwaasa of Lethbridge, Alta., will be coming home with two bronze medals in U14 action.

In doubles, Iwaasa teamed up with Swaine and they got to the semifinals, but then lost again to Montoya and his Mexican partner Erik Garcia, 15-10, 15-10.

In Boys U18, Kurtis Cullen of Brandon, Man., and Samuel Murray of Baie Comeau, Que., are bronze medallists, because they reached the semi-finals where they lost to Bolivians Carlos Keller and Jorge Louis Michel, 15-10, 15-10
Posted by Mauro at 6:36 AM