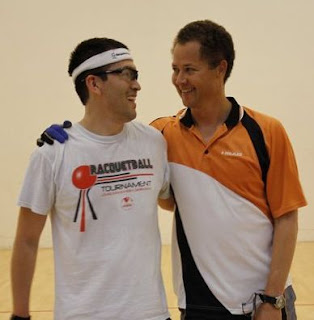 Trevor Meyer from Germany is the winner of the 2011 American European Racquetball Association (AERA) Invitational Tournament that was held last weekend at Ramstein Air Force Base in Germany. Meyer defeated Bolivia's Ricardo Verduguez in 2 games. The AERA Invitational is being played on seven courts in 2 clubs in Ramstein and therefor is the tournament with the most available courts on one site in Europe. It's one of the most important events on the European and US military scene. This years' event did not draw the usual amount of entries. While entries from the US forces were low this year, a large group of French players competed once again in Ramstein.
Posted by Mauro at 6:43 AM