Verduguez and Bizeau win in Paris 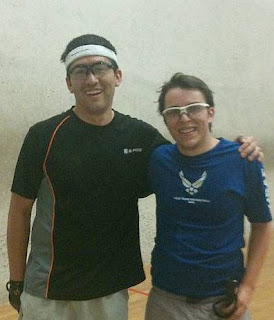 Ricardo Verduguez (BOL) and Maxime Bizeau (FRA) are the winners of the first combined tournament for Racquetball and Racketball (Racquetball on a Squash court) that was held last weekend in Paris. Verduguez defeated Bizeau on the racquetball court, while Bizeau won the racketball competition on the squash court. Check out the Courbevoie Facebook Page or http://courbevoie-racquetball.asso-web.com/ for the results of this event.

'France Racquetball' has suffered some major court closures recently. It is hoped that with some support by local governments new courts can be opened at some point in the near future. Fingers crossed!!All French players are asked to support these attempts.
Posted by Mauro at 6:48 AM