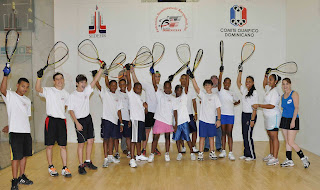 The XXVI World Youth Championship will be inaugurated on Sunday racquetball, at 6:00 pm at the Hotel Santo Domingo in a ceremony that will include the parade of the 17 delegations have confirmed for the event.
The president of the Dominican Federation of racquetball, Rafael Fernandez revealed that everything is ready for the start of the tournament, bringing together the best young competitors in the discipline.

"In this championship will come the best of global youth racquetball and have the opportunity to showcase the talent we have, which will be the future of our country," said Fernandez.

A total of 225 players will be competing in the World Youth Day event to be held in Pavilion Olympic Racquetball Center.

The party begins on Monday at 8:30 am, in the eight racquetball courts Pavilion and will be simulcast on the Internet through www.internationalracquetball.com page, sponsored by the company Wind Telecom.

The World Junior Racquetball Championships is organized by the International Federation of that discipline through the Fedoracquet. The event director is Gary Mazaroff competitive, who is already in the country.

The delegations of Bolivia and Ireland already in the country as well as technical staff who work in organizing the event. This Saturday will be coming to Dominican soil the remaining performances.

Among the countries that will be at the event include Canada, USA, Mexico, Guatemala, Honduras, Nicaragua, Costa Rica, Panama, Ireland, Korea, Japan, Venezuela, Colombia, Ecuador, Chile, Bolivia, Argentina, Puerto Rico and the Dominican Dominican, among others.
Posted by Mauro at 7:51 AM