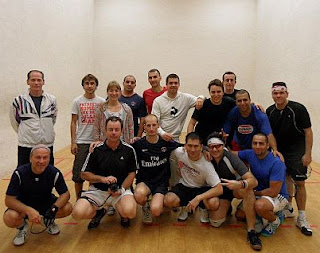 Another Racquetball and Racketball (RB on the Squash court) has been held with great success in Nanterre, France last weekend. "Everybody enjoyed the tournament and we also have seen some great matches on both courts", co-organizer Maxime Bizeau said. Plans for another combined competition are already on the way.
France Racquetball has suffered some very sad court losses over the past 12 months when 3 out of the 4 exisiting courts in the club in Nanterre, close to Paris, were closed out of the sudden due to business decisions by the club owners. While France Racquetball still puts lots of efforts in finding some new opportunities through local governments, the sport is still played on the remaining one court in Nanterre.

More information on France Racquetball and it's efforts can be found at www.france-racquetball.org.
Posted by Mauro at 6:26 PM