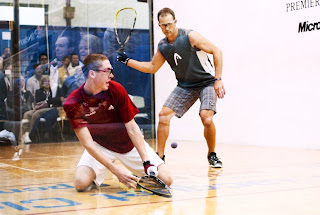 DAVISON, Michigan — The International Racquetball Tour’s first stop in Michigan in 20 years exceeded expectations, organizers said.
The Red Swain Shootout, which ran from Oct. 27 to Sunday, brought 26 pro racquetball players and more than 100 amateurs to the courts at the Davison Athletic Club to compete for their divisions top spot.
It also drew in about 250 spectators each day, said Tournament Director Don Schopieray.
In addition, matches and video highlights are broadcast at www.IRTnetwork.com for fans who can’t get to every big match. During the matches Oct. 29, more than 20,000 people worldwide watched the matches on the website, Don Schopieray said.
“It was awesome,” he said. “The energy, it was just crazy.”
The tournament also gave spectators a chance to mingle with the pros, who signed autographs, took photos and even hit the court to knock around a ball with kids, Don Schopieray said.
The event also was a fundraiser to honor tournament host Cliff Swain’s father, Red, who died of amyotrophic lateral sclerosis, or Lou Gehrig’s disease. Attendees raised about $1,000 for the Angel Fund, which supports people with ALS.
Cliff Swain is a six time racquetball champion who took the title when the tournament was last held in Davison in 1993.
Schopieray’s son, Brad, 18, turned pro right out of high school last year. He competed in the tournament and made it to the pro draw, also known as the round of 16, where he fell to No. 2 Rocky Carson.
“He was pretty happy,” Don Schopieray said. “Making the draw was the big thing.”
Brad Schopieray was ranked 29th in the world going into the tournament but his father said he should move up as a result of the tournament. Rankings have not yet been updated, according to the tour’s website.
Current No.1 Kane Waselenchuk continued his three year winning streak, taking home the top spot in the tournament.
Organizers plan on making the tournament an annual event, Don Schopieray said.
Posted by Mauro at 7:45 AM