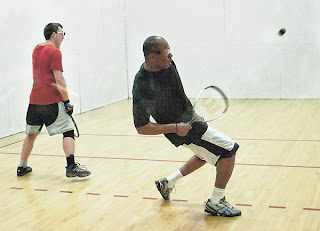 The Garrison team of Anthony Powers, Dave Faulkner and Renard Ellis overwhelmed the competition from their first game in the second round of the four-day tourney (they earned a bye in Round 1), allowing no more than nine points from any opponent in games played to 15.

“It’s just looking for different styles, trying to play your game and not deviating too much from your game plan,” Powers said. “There are always new players coming on, so you never know what to expect when you walk in there. You have to give your best and scope out the competition as you get close to the final to see what their strengths and weaknesses are, just like they are (doing to) you.”

From left, Garrison Command player Renard Ellis is congratulated by Danny Howell, FMWR sports specialist, as his teammates Anthony Powers and Dave Faulkner look on.
The 795th Military Police Battalion team of Robert Moore, Aaron Poulin and Mike Lynch were the tournament runners-up, fighting their way past the 169th Engineer Battalion, the two-time runners-up Dental Activity team and the 35th Engineer Battalion to advance to the final.

“We took second — that’s not too bad,” Poulin said to his teammates as the tournament drew to a close.

In the championship round, Ellis was the first Garrison player to emerge victorious, exiting Court 3 with a 15-9, 15-2 win over Lynch. Faulkner assured Garrison would take home the trophy win with a 15-2, 15-5 win over Poulin on Court 2. Powers then gave his team the sweep, defeating Moore, 15-1, 15-2.

The 92nd Military Police Battalion team of Jim “Doc” Blair, Damien Bangle and Brian Moreno finished third in the tournament, defeating the 35th Engr. Bn. in the third-place round.

“We had a good solid team. We came in without a lot of practice or a lot of notice, but we were able to pull some wins out,” Blair said.

Blair expressed the players’ appreciation for the quality of the tournament and the sports programs hosted by Family and Morale, Welfare and Recreation.

“This year’s tournament was great. (FMWR sports specialist) Danny (Howell) and the gang always put on a good show for us,” Blair said.

Bangle said the tournament represented not only a chance to represent his unit, but also an opportunity to meet other players.

“A lot of these guys, you might not have even bumped into before the tournament, but I’ve had a chance to make a couple of friends here — the guy I just played, we’ll probably play each other again, just because we know it’s a challenge,” Bangle said.

Powers and Faulkner, who were also last year’s doubles racquetball champs, play on a regular basis at DFC. Powers said he hopes to bring more players to the courts.

“One thing I wanted to do this year more than any other is to try and be an ambassador for the sport and try to get more new players interested in racquetball,” Powers said. “You don’t want to wait an entire year between Commander’s Cup tournaments to play. So, I hope we’ll see some new faces and be able to get new players some more experience.”

“This game is a blast. The rules are simple to learn, but it will take you years to master — there’s always a new complexity or wrinkle to unravel,” he added.
Posted by Mauro at 4:36 PM