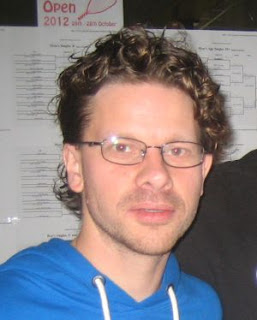 Pascal Matla from Zoetermeer is the winner of the 2012 Dutch Nationals (Nederlandse Kampioenschappen) that were held last weekend at the Westvliet Racket & Welness club in The Hague. Matla defeated last years National Champion Erik Timmermans in the final in 2 straight games. It is Pascal's 10th National Singles title. On the ladies side, Carola van der Meer claimed her first National Singles title this year. The 2012 Dutch Nationals have been one of the more successful tournaments in recent years as it attracted more Dutch players to compete.

Check out all results at www.racquetball.nl/nk.html
Posted by Mauro at 4:48 PM