Racquetball becomes more than a game for Kaua‘i resident 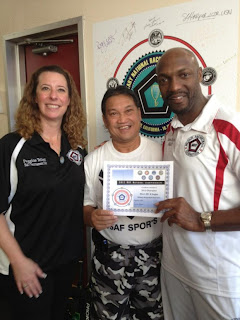 SAN DIEGO — While racquetball is a fun recreational sport for some, for Kaua‘i resident Sgt. Phil Eliana, the game brings an entirely new meaning. Eliana recently participated in the 5th annual 2012 All U.S. Military Racquetball National Championships, hosted by the Military Racquetball Federation, Nov. 2 to 4 at the 32nd Street Naval Base in San Diego. Eliana, who is assigned to the 293 Combat Communications Squadron at Pacific Missile Range Facility and also a member on the elite All U.S. Air Force Racquetball Team, competed in two divisions at this event. He played with his brother in the doubles tournament, and the two made it to the semi finals. “It’s great to team up with my brother,” Eliana said in a letter to The Garden Island. “But winning the singles 50-plus age division is what I was really aiming for since placing second in this event two years ago.” He came away victorious in the 50-plus age division and the victory was extra sweet for other reasons: Eliana’s older brother Sterling, who is from Guam, was recently diagnosed with stage 4 cancer and died earlier this month. His funeral is this week. “This win is for you big brother,” Eliana said. Additionally, since the relocation of Kaua‘i Athletic Club in May, Eliana has not had any racquetball courts to train on, which means he had to train differently these last few months to prepare for the event. “It’s great to attend a U.S. National Championship event, not really knowing how well I would do and then coming home with a national title,” Eliana said. “It’s an amazing feeling and achievement, especially at age 53.” Eliana said that the Military Racquetball Federation is an organization with a mission to help support and fund the Wounded Warrior Project. Besides hosting tournaments at military bases around the country and overseas, the organization is focused on expanding and hosting a new program: Racquetball Rehabilitation Clinics. This program is the only rehabilitation program designed to focus on both physical and mental attributes for the war-fighter suffering from the affects of combat (post-traumatic stress disorder/traumatic brain injury /amputees and wheelchair bound patients). This MRF program is partnering up with Veterans Affairs hospitals and clinics around the nation. Although racquetball is no longer a growing sport here on Kaua‘i, as the only certified professional level Instructor in both the American Professional Racquetball Organizationand United States Racquetball Association here in Hawai‘i, Eliana hopes to be a big part of this RRC program when it does come to Hawai‘i.
Posted by Mauro at 4:24 PM