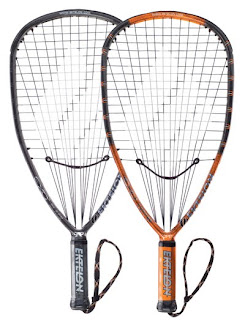 Ektelon, a leader in racquetball product innovation, announces the launch of EXO3, its newest high performance racquet line. EXO3 features the patented, revolutionary Energy BridgeTM and Energy ChannelTM designs which suspend the string bed, expand the sweet spot and deliver a myriad of playing benefits. The line-up includes two initial models, the EXO3 Black and EXO3 Copper available wherever Ektelon products are sold beginning July 2009.
Commenting on the technology, Scott Winters, VP of Indoor Sports at Prince said, “For years, racquet manufacturers have been trying to create a racquet with ultimate power by making larger and stiffer frames, elongating main strings and reducing cross strings in the string bed. All of these methods result in more shock to the arm which can cause injury. EXO3 features the Energy ChannelTM, a radical new discovery - a new source of energy which creates ultimate power while reducing shock and improving stability on off center hits.”
The Energy Channel is a radical new frame design which creates elongated open channels located at the 12, 3 and 9 o’clock positions of the frame - which moves the mass to the outer most edges of the frame for exceptional stability. Complementing the Energy ChannelTM of EXO3 is a visible, engineering breakthrough called the Energy BridgeTM. Soft thermoplastic pieces are inserted into the Energy Channel to create an exo-skeletal bridge structure along the outside surface of the frame. The result is a string bed that is almost entirely suspended from the frame itself.
“To have the majority of the strings never come into contact with the frame is an amazing feat that offers unprecedented benefits,” said Roberto Gazzarra, VP of Research and Development at Prince Sports, Inc. “Through our laboratory testing, we actually found that compared to current competitive frames, EXO3 delivers up to 63% less shock and up to a 51% larger sweetspot without ever having to increase the physical head size of the frame. The result is a virtual head size increase from 106 to 117 square inches creating our highest power level ever of 4000 in a frame that feels even more stable, more comfortable and more maneuverable.”
“Having the ability to take advantage of a super-oversize racquet without compromising, and actually enhancing, control, feel and maneuverability is incredible,” said IRT Pro Champion, Rocky Carson. “My new EXO3 racquet feels incredibly stable in my hand and allows me to blast the ball with higher velocity than ever before. I cannot wait to hit the tour next season with this new weapon.”
“We have spent more time than usual playtesting the new EXO3 frames and the feedback has been incredible,” states Ektelon Product and Promotions Manager, Bryan Crosser. “This technology is so radically different than anything we have ever developed that the entire playtest team and our key players got involved and played a huge role in the final product. Through the process, we determined that thinner gauge strings and higher string tensions enhance the overall performance of the frame. This is why we are introducing EXO3 with a 17 gauge version of Ektelon Premier Power versus the 16 gauge equivalent from last year. Our players are also excited about the addition of the new grip size, SSR = Super Small Round which will feel like a smaller size handle than our SS grip allowing them to generate more snap in their stroke.”
Quick Technical Facts About EXO3 Energy BridgeTM - An exo skeletal structure made from thermoplastic that creates racquetball’s first suspended string bed. The suspended string bed increases the virtual headsize of the racquet and reduces frame vibration by up to 63% and enlarges the sweetspot by up to 51%.
Energy ChannelTM - A sculpted groove within the frame that enhances the dynamic benefits of the Energy BridgeTM to provide added stability, boost ball control and increase spin.
The Racquets: There will be two models in Ektelon’s initial EXO3 offering:
EXO3 Black EXO3 Copper Unstrung Weight: 170-180 grams Unstrung Weight: 185-195 grams Balance: 1 point head heavy Balance: 1 point head light String: Premier Power 17 (Black) String: Premier Power 17 (Black) String Tension: 34 +/- 4 lbs String Tension: 34 +/- 4 lbs Grip: Vision II Grip: Vision II Grip Sizes: SSR, SS, SM Grip Sizes: SSR, SS, SM SRP: $300 SRP: $280
Posted by Mauro at 9:17 AM