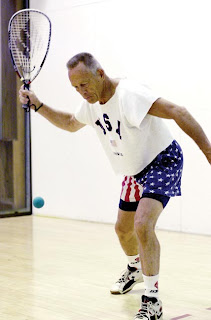 You play to win the game. Not that you can't get more out of sports than that.
Jerry Northwood will be 73 years old in December. "Chronologically only, you understand," he said. Northwood, who has lived in Williamson Valley for 29 years, is an avid racquetball player. He strives to be the best in the world in his age group and might not be far off.
Earlier this month at the World Senior Racquetball Championships in Albuquerque, N.M., Northwood took the bronze medal against competition from across the country and the world.
It was a bit of a disappointing result for a guy who has won numerous titles before. Especially when he beat the man he feels is the best in the world in the 70-plus age group, Ron Adams from California. But again, there's more to racquetball than just being the best.
A 91-year-old man competed at that same tournament, playing down against the 80-plus group.
"Hopefully I'll still be playing when I'm that age," Northwood said.
That is a big reason he is an advocate for the sport is because of what it does for your health, as evidenced by his elders still competing in their 80s. "They're still out there, they're playing and they're having a good time," Northwood said. "They're having fun and they're staying healthy."
He takes the sport very seriously, playing for a couple hours three days a week, working on fundamentals three days a week and exercising each and every morning. "It keeps me in shape, obviously," he said. "You have to watch your nutritional pattern and your conditioning pattern to be ready for a tournament. When you go to a tournament, win lose or draw, you're in better shape than you were before." Once upon a time, handball was Northwood's game. He went to Cal State Fullerton on a football and baseball scholarship and the baseball coach required all players to play handball for their hand-eye coordination. But Northwood got drafted, went into the service and hurt his left arm in airborne training. "I couldn't play the same," he said of needing both arms equally in handball. "Fortunately, racquetball came along. At first when I was introduced to it, I thought 'I don't want to do this, I'm a handball player.'
"Quickly I saw that it was considerably easier on your body with considerable more strategy."
He got introduced to the game when he was asked to warm up a top player at the YMCA before a tournament. "Because I had some basic knowledge, I had some immediate success playing this guy," Northwood said. "But nowhere near his level at the time, which was the greatest thing that could ever happen to me." "Since I was scoring a few points, he then decided to take me to the cleaners for about four or five straight games. Then I got really interested because I could see how you could play the game." He went back to handball the next day and realized how much his hands hurt and he now had a new and better option. And he dove in headfirst. Northwood is a part of Team Ektelon, one of his sponsors. He is writing a book called "The Keys to Championship Racquetball." And he teaches others to play at the Prescott Downtown Athletic Club. He stays busy and says he doesn't necessarily have the very top skill level.
"My main claim to fame in the sport is conditioning because I've been in it all my life," he said. "There isn't anybody in the sport that's in better physical condition."
So he tries to wear down his opponents, which he'll do next week in St. George, Utah, at the Huntsman Senior World Games. It's one of about five or six tournaments he makes in a year.
He joked that it's one of the few sports where you actually look forward to getting a year older and moving up in an age bracket. "Because the other ones start dying off and being injured," he said. Northwood plans on being around and competing in racquetball for a while longer.
Posted by Mauro at 1:50 PM